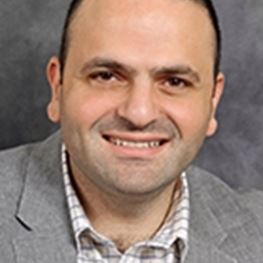 Associate Professor Charbel Sandroussi is an extensively experienced surgeon specialising in upper gastrointestinal, liver and pancreas diseases. He has a special interest in transplants, obesity surgery and advanced surgical procedures.

With a breadth of experience in transplant surgery, Charbel treats adults and children for both organ transplants and organ removal and is experienced with advanced surgical techniques such as ERCP. This procedure uses a tube to X-ray the affected area. Today, he is one of the highest volume cancer surgeons in NSW.

Charbel graduated with honours from the University of Sydney and undertook general surgical training at Royal Prince Alfred Hospital. Here, he completed a masters in medical science at the University of Newcastle and after completing his general surgical training, Charbel undertook sub-speciality training in upper gastrointestinal, hepatobiliary and transplant surgery. He spent 4 further years training in Australia and Canada resulting in an accreditation in liver, pancreas and kidney transplantation from the American Society of Transplant Surgeons (ASTS). He also gained accreditation in hepatobiliary surgery from the American Hepato-Pancreatico-Biliary Association (AHPBA).

He is head of the department of hepatobiliary and upper gastrointestinal surgery at Royal Prince Alfred Hospital and a VMO at Chris O’Brien Lifehouse, Strathfield Private, and the Mater Hospital. Committed to teaching and research, he was appointed as Clinical Associate Professor of Sydney University in 2013 and is active in teaching at all levels.

His research interests include vascular resection and replacement during liver and pancreas surgery, evidence based surgery, neoadjuvant treatment, surgical decision making, oncological surgery in frail patients and live donor liver transplantation. He is a co-director of the Surgical Outcomes Research Centre at the University of Sydney, and the director of clinical research at the RPA Insitute of Academic Surgery (RPAIAS). Charbel is also a member of the Scientific advisory committee for PANCARE. He is published widely in liver transplantation, hepatic and pancreatic surgery.